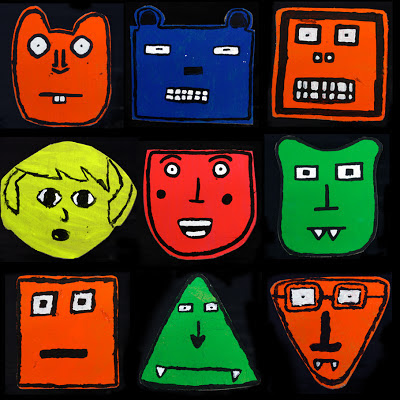 These faces are inspired by Aleks Danko's "Incident – Ambivalence", a piece that really stood out to me earlier this year when I visited the MCA in Sydney. I thought it would translate really well to a primary art project. The faces shown here are the handiwork of a 5/6 class I was with for several weeks.

Incident – Ambivalence is shown on its own at the very bottom of the post. It is constructed from wood and galvanised steel with dimensions of 28 x 27.5 x 2.5 cm. It was placed relatively high on the wall and demanded my attention as I entered the gallery space. Apparently Aleks reappropriated the image from an 18th century book, and the artist responsible for the book believed the face was reminiscent of children's drawing. 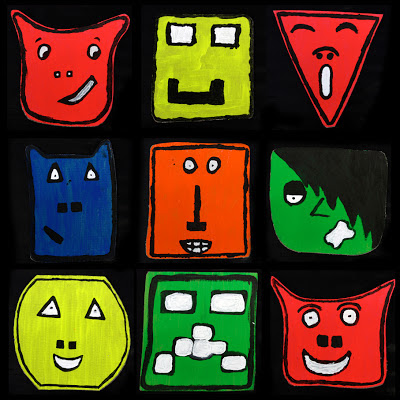 We began by looking at and discussing his work (as seen on the smart screen). To make their own faces the children recognised the basic features employed by Danko. Essentially these were a single bright colour plus black and white, and simple shapes and lines representing only the most obvious features of the face. The children were asked to create their own face in keeping with this style.

The students sketched some ideas on scrap paper before drawing their large face on art paper. Initially I was planning for them to paint this directly, but lucky for us there was an abundance of large thick cardboard that arrived as packaging at the school that week! So the students cut out their paper face to use as a pattern, these were then traced onto the cardboard which I cut with a stanley knife.

Next the children painted their cardboard head shape with a base coat of their chosen fluoro (the orange and pink look almost indiscernibly different on screen). Once dry they referred back to their paper plan to paint all their facial features with black lines, and finally any white parts, again once the black was fully dry. They made for a striking collection on the classroom wall. 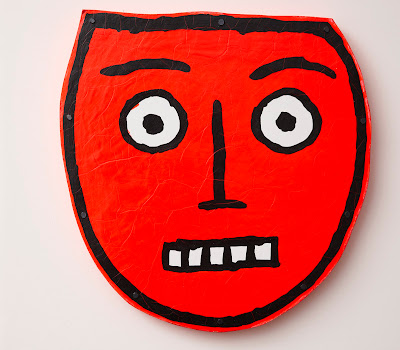